This post is gonna go a little differently than normal but in a good way!

It may only be a date in my head and more of a we are having a few friends over for dinner in real life but I am more nervous about this meal than I was cooking for an entire room of strangers. I wasn’t there when that room full of people were eating my food and this time I am going to be the hostess! The hubs has assured me that I have nothing to worry about, but still…

I am going to go with something  that I know I make well and that is Asian short rib tacos. This is a cut that I can find at my local wholesale club but you might live somewhere that you have a meat market that is close and can provide you with them. They are called Thin Sliced Bone In Short Ribs or Korean Short Ribs. I am going to marinade them in a mix of Chinese Black Vinegar, Chili Oil, Sesame Oil, Mirin, Rice Wine Vinegar, Garlic Hoisin, Soy Sauce, Ground Ginger, Black Garlic Powder, Shallot Powder and Furikak. I lay the ribs out on a baking sheet and cover with the marinade and let them hang out in the fridge overnight.

There will be a cilantro lime rice, egg drop soup and  a broccoli slaw to go with. To this end I have one of those microwave pouches of jasmine rice and i will cook it according to package directions but I am going to sneak in a bit of flavor. The directions for cooking the rice say to tear the pouch halfway open and nuke, before we nuke it we are going to add in the cilantro and lime zest. Adding the things to it before it cooks gives the extras a chance to hang out and make friends with the rice so when it’s finished there is less that will need to be added at the end.

For the broccoli slaw I have a package of Broccoli Slaw Mix that has shredded broccoli stalks, red cabbage and carrots. The dressing is going to depend on how the meat comes out. If there was a bunch of fat on the meat and they come out all greasy and unctuous then we need a crisper dressing, if the meat comes out on the sweeter side then our dressing can go a little salter. We will be using either Red Wine vinegar or Chinese Black vinegar as well as a pinch of salt, pepper, garlic, shallot, black pepper and maybe some dill. I am out of fresh but there are a few other bits that I need to get so if where I get my bits has fresh dill the I will get some. I am also looking for spring onions, cilantro and limes for the rice.

The meat goes into the pressure cooker with the marinade. I could be wrong here but I feel like the cooking process will kill any cooties in the marinade, also I have yet to kill anyone. My cooker will only go for 2 hours so I started early enough that if the meats needed more cooking there would be time and this ended up being a good thing because I ended up cooking them an extra 30 minutes because they weren’t fall aparty enough for me. I also took the opportunity to taste the meats so I could get a better idea of what I wanted to do with the slaw.

Let’s talk about this slaw for a minute. This is one of the best creations I have ever found and I use it on almost every taco I make because the broccoli stalks take flavor brilliantly and you can make it Mexican or Greek or Asian or Indian or whatever!!  For this taco I decided to use red wine vinegar, sugar, salt, garlic and pepper. I put on the salt and pepper directly on the slaw and the rest gets mixed up in a bowl that then the slaw gets added to and slopped around in.

The egg drop soup also come from a package but you do get to add an egg so that makes it mostly made from scratch! We had 4 mouths so I used 2 packages of the mix but I only had 1 egg but I don’t think that was bad, it may have been too eggy with 2 eggs. I also add about a tablespoon of soy sauce to the soup while it cooks

So far we have meat in the pressure cooker, rice in the microwave, slaw in the fridge and soup on the stove, let’s get ready to serve!  I had flour and corn tortillas on hand so I warmed some of each because who like choices? I put the meat in a fancy bowl, the rice in a slightly less fancy bowl, I dished the soup directly into the eating bowls to save room on the table, the tortillas were wrapped in a pretty towel and put on a plate for easy passing and I put some extra sliced green onion in little super not fancy bowls and the slaw got made in a nice bowl so I just left it in that to save a dish! We laid everything on the table and sat down to have one of the best evenings ever! 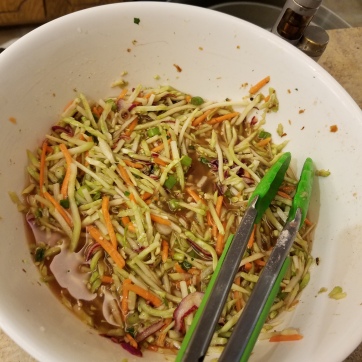 P.S. I know the pictures for this one aren’t the best and I do apologize!

I am a home chef and a professional eater. This is my journey! View all posts by Alison Perry